I am excited to announce that a new book is currently in press for Routledge! 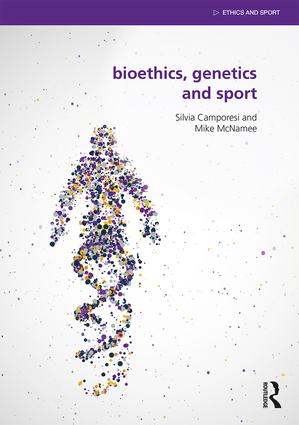 The book is titled  “Bioethics, Genetics and Sport”, is co-authored with Mike McNamee (Swansea University) and will be published in March 2018.

Here’s a sneak peek of the table of contents:

Chapter 1: The nature of genetics and its place in medicine and sport

The aim of this chapter is to introduce the reader to key concepts in genetics and to the methodological approaches in the study of the genetic bases of sport performance. We first introduce some key terms that are integral to the debates concerning the use of genetics in sports. We then offer an overview of the studies into the genetics of sport performance from early ‘60s up to now, focusing on the three main approaches to investigate the genetic basis of sport performance: candidate genes association studies’, ‘genome-wide studies’, and ‘genome wide association studies’ (GWAS). We note how many, though not all, factors that are relevant for sport performance can be measured and quantified. We also note several epistemic caveats that need to be pointed out concerning each approach if we are to proceed to a proper evaluation of them for ethical deliberation.

Chapter 2: What role for genetic testing in sport?

In line with the premise of this volume to discuss scenarios grounded in feasible science, and not in science fiction, in this chapter we discuss genetic tests for injury prevention in four cases (ii) sudden-cardiac death related conditions; (ii) concussion-related trauma brain injuries; (iii) over-exertion complications related to sickle-cell anaemia trait; (iv) Achilles tendinopathies and anterior crucial ligament injuries. Beyond testing as a potential precursor to therapeutic interventions, we also discuss the role of genetic testing for (v) training optimisation. We argue that there is a role for genetic testing in sport, but only after some relevant distinctions have been made with respect to its aims, and even then, that role is a limited one.  We do not discuss in this chapter genetic testing for talent identification and development, which are the focus of chapter 3 in this volume.

In this chapter, we discuss the ethics of genetics-based talent identification programmes in sports. We discuss the validity and reliability of the tests and the claims made by direct to consumer companies, before presenting a range of ethical issues raised by these tests, which we frame in terms of parental/guardian duties, children’s rights, and best interests. We argue that greater ethical emphasis needs to be put on the parental decision on the wellbeing on the child going forward, not on ex post justifications on the basis of positive or negative consequences. Such decisions must address wider questions of what a good (sports)parent ought to do help the child flourish, and how to balance the future-adult focus necessary to nurture talent with the wellbeing of the child in the present. We conclude that current genetic tests for “talent” do not predict aptitude or success to any significant degree and that coaches and parents should be discouraged from using them.

In this chapter we provide an overview of biobanking, commencing with an introduction to the nomenclature of the field.  We then present some key epistemological issues raised by the sheer complexity of biobanking research, and discuss the related ethical issues raised, i.e. privacy, security, ownership of data. We then proceed to discuss how biobanking research also raise challenges to traditional forms of informed consent, the cornerstone of research ethics for more than fifty years, and how new models of informed consent have been developed for biobanking research that attempt to meet the unique epistemological challenges of such research. We present several such models arguing for their benefits and weaknesses in ethical terms. We use the Athlome Consortium as the largest current example of collaborative sports genetic biobanking and make ethical recommendations in relation to its development.

In this chapter we discuss whether genetic technologies aimed at enhancing performance are to be considered as a form of innovation or a new form of doping. We start our discussion by presenting a recent case of gene transfer self-experimentation at the cross-roads of therapy and enhancement. We then proceed, in line with the spirit of our volume, to analyse some feasible targets of gene transfer technology aimed at enhancing athletic performance. Among these: growth hormone, insulin-growth factor, myostatin, erythropoietin, and vascular endothelial growth factor. We then turn to a discussion of WADA’s characterization of ‘gene doping’, a discussion of the precedents, the risks for the health of the athletes and the challenges for detection. To conclude this chapter we engage with the philosophical discussion around the nature genetic enhancement: should it be understood as doping, or as an ‘innovation’? By doing so we lay the ground for our discussion of therapy and enhancement in sport and of the spirit of sport in chapter 6 in this volume.

Part II: “Enhancement, Therapy, and the Ethical Construction of Categories in Sport”

Chapter 6: Enhancement, Doping and the Spirit of Sport

Given the central role of medical research in driving developments in pharmacology and genetics, and the subsequent application of therapies to the quest for the enhancement of athlete performance, the therapy/enhancement distinction has assumed a hugely significant role in bioethical scholarship over the last twenty years.  It has also played a significant role in the scholarship of doping in athletics, both of a genetic and non-genetic kind.  In this chapter, we critically present some of these debates in the contexts of the emerging field of sports medicine ethics, in order to shed light on the ethics of genetic engineering. We conclude that simply articulating an account of the goals of medicine from which we may deduce some easy priority of one set of interventions (therapeutic) over another (enhancements) is problematic, and argue that a case by case analysis is the best to be hoped for.  We turn then to a review of the salient points in the many debates over the therapy/enhancement distinction in order to shed further light on doping in sports.

Chapter 7: A case study in ‘Gene Enhancement’: Gene Transfer to raise the tolerance to pain: a legitimate mode of enhancement, or illegitimate doping?

In this chapter, we explore the question of whether it is ethically justifiable for individuals to seek an experimental gene transfer treatment in order to raise the threshold of their tolerance to pain. We consider here two plausible scenarios: in the first scenario the individual is a patient; in the second a non-patient athlete. We employ a comparative strategy to highlight the similarities and dissimilarities between the ethical frameworks used to evaluate the two scenarios. We argue that the context of gene-transfer matters for the evaluation of the ethical permissibility of the experimental practice: while in an everyday life scenario, we do not accord to pain an inherently valuable role, it does play a meaningful and constitutive role in endurance athletic competition, along with a range of other factors. We argue that genetically increasing the capacity for pain-tolerance, or even subtracting pain altogether from the sports experience, we would omit a fundamental part of the meaning of endurance sports.

Chapter 8: On the Eligibility of Female Athletes with Hyperandrogenism to Compete: Athleticism, Medicalisation and Testosterone

In this chapter, we discuss two recent important cases in elite sport in which the female body has been constructed as ‘other’ or ‘abnormal’, namely the body of South-African middle-distance runner Caster Semenya, and of Indian sprinter Dutee Chand. We first present Semenya’s case, which triggered the drafting of the 2011 IAAF regulations on eligibility of female athletes with hyperandrogenism to compete in the female category. We then critically analyse the IAAF regulations both from a scientific and from an ethical point of view, before discussing Dutee Chand’s case and her appeal to the Court of Arbitration for Sport. In the second part of this chapter we comment on CAS landmark decision (July 2015) to suspend the regulations for 2 years pending further evidence from IAAF, and the more recent developments (July 2017). We conclude that even if additional evidence were put forward to demonstrate a causal association between increased testosterone and performance, that would not constitute an unfair advantage and ground for reinstatement of the Regulations.

Chapter 9: Congenital and Acquired Disabilities: What counts as Unfair Advantage in the Paralympics?

In this chapter we continue the discussion of eligibility and what counts as an unfair advantage in the context of Paralympic athletics. We first discuss how the Paralympics Olympic Committee classifies impairment and constructs different categories for competition. We then set out to distinguish congenitally impaired athletes from those who have acquired their impairments through a variety of life circumstances.  We discuss the practical and ethical challenges of classification of Paralympic athletes, but also compare and contrast the cases of Oscar Pistorius and Markus Rehm as two exemplary contemporary cases of congenital and acquired disabilities respectively.  We argue that while both have arrived at their impairments through different routes, each sport (running and jumping) has demands that compensatory or assistive technology may support or undermine.  While this can be unproblematic in conceptual and ethical terms within classes of Paralympic sport, it can be problematic in sprinting and in long jump, especially, where the take of phase may be radically enhanced by technological assistance.  To conclude, we discuss the role and value of technology in relation to the future of sport.

Chapter 10: The re-inscription of the concept of biological race through sport in society

Recent discussions of the genetic basis of sports performance have exacerbated racial discourse, although many of the racial assumptions remains problematically covert hidden in the context of sport. Our aim in this chapter, then, is to apply the conceptual tools of philosophy and bioethics to bear on racial discourses in sport. We explain how the use of the concept of ‘human race’ is not helpful either at ontological or at epistemological levels in genomics research, including in sports genomics. We then proceed to spell out the ethical implications of the continued use of the concept of race in sport. We conclude that the concept of race ought to be dropped altogether from genetic research, including in the context of sports and sports genetic discussions.

The book can be pre-ordered here:

This entry was posted in Bioethics, Philosophy of Medicine, Philosophy of Sport and tagged Mike McNamee, Routledge, sport and ethics. Bookmark the permalink.